The Bottom Drawer Sessions, No 5 is finished and ready for release, just in time for my June tour with Peter Asher. The album hits stores (and iTunes, etc) on 28 June, but if you order directly from this site, we’ll ship it to you a few weeks early.


Due to a delay in the issuance of my American work permit, we have had to reschedule some shows. The dates below have been changed to reflect the current schedule. Looking forward to seeing you all on the road...


Here is a full list of this month's shows in the USA, where I will be appearing alongside Peter Asher of Peter & Gordon.
March 9-11 The Fest For Beatles Fans at the Hyatt Regency - Jersey City, NJ
March 12 The Rams Head On Stage - Annapolis, MD
March 13 Sellersville Theater 1894 - Sellersville, PA
March 14 Daryl's House - Pawling, NY
March 15 Regent Theater - Arlington, MA
March 16 The Flying Monkey - Plymouth, NH
March 17 Old Town School Of Folk Music - Chicago, IL
March 18 Midland Cultural Centre - Ontario, CAN
March 19 Hughes Room - Toronto, CAN
March 21 Sportsmens Tavern - Buffalo, NY
One added note - I'm happy to say that the fourth volume of the Bottom Drawer Sessions will be out in the spring. See you on the road...
Love,
Jeremy

Just got back from Paris, where I had the chance to reconnect with an old friend - Marianne Faithful.

And so, ladies and gentlemen...taraaa...drum roll...I give you BDS3, as it is known in these parts. A little later than planned but I have been somewhat busy this year in "London's Glittering West End."
As always, such a shame that Big Dave Pierce is no longer with us and therefore unable to hear how our songs sounded when finished. His words always came first. All I had to do was to set them, after some judicious editing. My pal Jo Meacham suddenly remarked the other day, "you know, there's an immortality thing going on here. His words will live on." Indeed. And while I'm on that subject, Jo's playing goes from strength to strength, as I'm sure you'll agree. He and I have been working together, on and off, for almost 20 years. It shows, I think.
I hope you enjoy No 3 as much as we have blah blah blah. Amazingly, the Drawer is still over half full. We are now deep into No 4 and, if I say so myself, it will be a bit of a corker. To remind you, there are 7 albums planned. The idea is that you should not find that they peter out towards the end and I am therefore holding back some scrumptious songs. And now, back to work - thanks for listening. Until next time...
Love,
Jeremy

Today is Jeremy's birthday, and we're celebrating with the debut of "Is It Any Wonder?" - the first track from 'The Bottom Drawer Sessions, No. 3' - out in stores and online on June 1st.

Pre-order signed and unsigned copies today in the shop!

After several weeks of previews, 'The Girls' opens tonight at the Phoenix Theatre in London's West End.
Please do follow 'The Girls' on their social media for more news and updates!
The Girls Musical on Facebook
@TheGirlsMusical on Twitter

I know it's been a while but these things take time. At last discs have been pressed, schedules arranged, oracles consulted and a propitious date agreed for the release of the keenly awaited (by me) 'The Bottom Drawer Session,s No. 2' - out on March 22nd!
It's the mixture as before, basically. Jo Meacham and I noodling away on two guitars and eventually producing something we're really proud of.
The project has been overshadowed by the death of my old pal David "Big Dave" Pierce. Lyrics and poetry just poured out of him and the songs followed. There would have been no Bottom Drawer Sessions without him. He was able to hear some rough mixes of the album before he left us and was absolutely thrilled and proud. His words live on.
And so the plan is to release the new album on my birthday. A birthday present from me to me, you might say, but actually to any and all of you as well. I hope you have as good a time listening to it as I did making it.
And now on to No.3...

My old pal David "Big Dave" Pierce left us this week. The same day as Bowie. As Chad wrote to me, " Two Davids on the same day". It was not unexpected. A series of strokes had left him sadly depleted, stuck in a Paris hospital, devotedly cared for by the wonderful Cristina. When I spoke to him last week, he hardly had the energy to speak. He was desperate to leave and finally did. A blessed release.
We met in the early 80's at a party given by his friend, the jazz singer Annie Ross. An enormous Canadian chap in a cowboy hat. "And what do you do?", I enquired. "I'm a lyricist". Not the usual answer. And so he was, working with the wonderfully talented Rick Jones and his band Meal Ticket. I went round to his place the next day, utterly intrigued. And when he produced an enormous folder stuffed with unused song lyrics and poems, I knew I'd struck gold. I took a few home with me and, using the excuse to give our dog Rags a walk, rushed to the park. I started humming to some words titled Zanzibar Sunset and knew within moments that something wonderful was happening. From then on, as life blew us both in various directions, we wrote in London, Los Angeles, and then finally and most happily, in Paris.
His place in Paris in the then unfashionable 14th district, was exactly where you might imagine a bohemian writer might live. An old factory on two floors stuffed with a chaotic collection of old bullfighting posters, ghastly paintings on velvet, pin up calendars from the 50's, all of it thoroughly unclean with a resident colony of moths. The perfect place to work in fact for two guys whose marriages had fallen apart. At that period I was doing a fair bit of filming in Europe and always got the company to route me back to London via Paris, open return. This was because there would inevitably come a time, usually between a week and ten days, when we would mutually decide that enough was enough and we couldn't stand each other's habits anymore. We were true opposites. The ultimate Odd Couple.
His work lives on, as all art does. Not only in his splendid crime fiction novels, as funny and ironic as he was, but now in our songs. The words always came first, driving the music in totally unexpected directions. Some of the happiest times in my life were spent in his company. Goodbye, old friend.

I'm currently in rehearsals for 'The Girls' - a new musical by Gary Barlow and Tim Firth.
'The Girls' opens at the Leeds Grand Theatre on 14 November and runs until 12 December. Tickets are available here:
https://www.leedsgrandtheatre.com/Online/girls
A Manchester run at The Lowry begins on 8 January and ends on 30 January. Tickets for the Manchester run are available here:
http://www.thelowry.com/event/the-girls
Chad and I will be back on tour in America in 2016, when I will also be releasing my next album - 'The Bottom Drawer Sessions, No. 2'.

One year ago today I debuted my first solo album - 'The Bottom Drawer Sessions, No. 1' - at a charity preview concert in Tacoma, Washington. Since then, I've received a number of questions about the significance of the memorabilia pictured in the album artwork. In answer to your requests, we've created this short video guide to my bottom drawer. I hope you enjoy this little glimpse behind the scenes.

Thanks as always to Alma at LilMarauder Productions for the video.

If you are one of those lovely people who sent Birthday cards and were waiting to see if they had arrived, the answer is yes, finally, a couple of days ago. And what an amazing & humbling collection of good wishes they turned out to be. Extraordinary, really, that people should bother. Huge thanks to you all, of course. Apparently, a famous baseball player - one Satchel Paige - used to say, " how old would you be if you didn't know how old you are?" Hmmm. Well, let's switch the numbers round and say 47. That'll do for a start.
Thus, suffused with youthful vigour, I am hard at work on BDS2, the old bottom drawer sessions, that is. I can report that at the time of writing about 3/4 of the tracks are in fine shape, with the remaining quarter in need of some judicious tinkering. As it happens, we are tinkering tomorrow. Can't wait. Thrilling. So much so that I'm already thinking about BDS3. Believe me, the drawer is still overflowing, and I'm still holding back some of my favourites.
Here, Spring has sprung and England is in flower. I suggest you get over here while the dollar is strong and join in the fun. I'll be going the other way in May for the West Coast Chad & Jeremy dates, of course. Looking forward to working with My Old Pal again. And, in particular, that moment when we first sing together and - wow - there is that amazing blend, still there. Awesome, as you say over there.
See you there, perhaps...
Love & thanks,
Jeremy.

Chad and I have three 'An Evening With Chad and Jeremy' dates coming up this May. They are:
May 23rd North Las Vegas, NV Summer Of Fun Kickoff @ The Cannery
May 24th San Diego, CA AMSD Concerts
May 29 Santa Monica, CA McCabe's Guitar Shop

Chad and I are looking forward to reuniting with Peter Asher, Billy Jay Kramer, Mike Pender's Searchers, Terry Sylvester, and Denny Laine as the British Invasion Tour begins tomorrow in the United States. These are the dates - I hope to see you there! 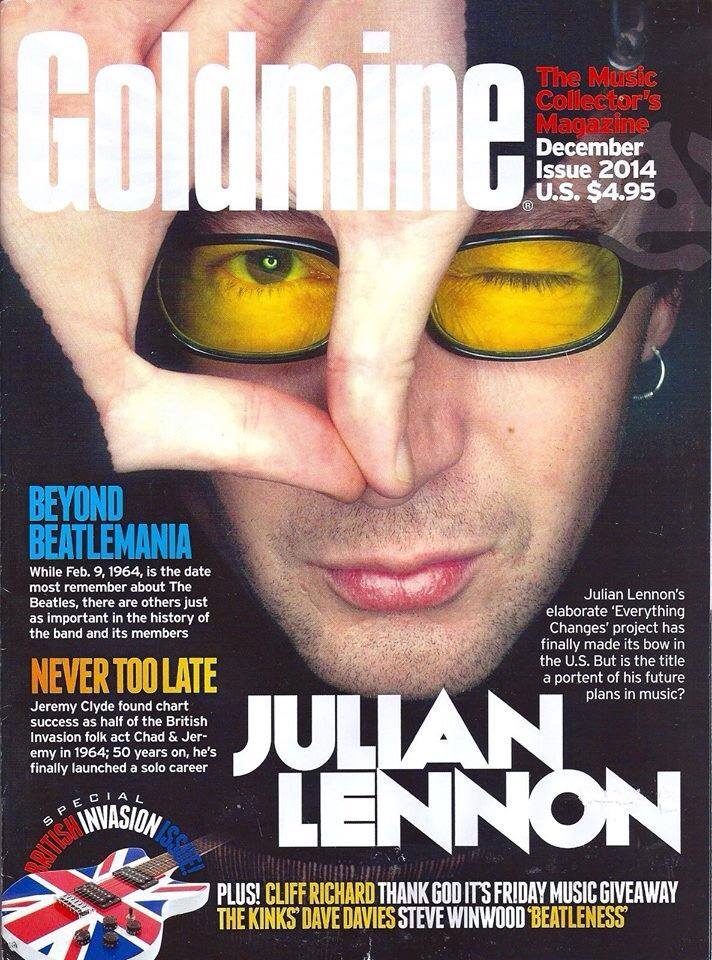 Jeremy is featured in the current issue of Goldmine magazine, with his interview with Allison Boron about 'The Bottom Drawer Sessions' getting a mention on the front cover.

Music video for "That Will Be That" uploaded.

Online now, through Chad and Jeremy's website, is Jeremy's Autumn Letter From London, in which he writes about the fall tour, exhaustion, and his new solo album and hints at things to come in 2015.

Photos from Jeremy's show in Tacoma, Washington uploaded. Music video for "It's All Too Much For Me" uploaded. Pre-order purchases have been sent. Extended liner notes have been added.

Larry LaRue, of The News Tribune has written a wonderful news article about Jeremy's show, this Sunday, at the IPC Tacoma. Read it here: Jeremy — without Chad — invades Tacoma for benefit concert. Thank you Larry!

Music video for "I Wonder Why" uploaded.

Jeremy's first show to feature the songs from "The Bottom Drawer Sessions" is coming up in just a few days at IPC Tacoma. Jeremy's dear friends Rick Jones and Valerie Neale will be opening the night and performing with him. Tickets are free, but donations to Habitat for Humanity are encouraged!

Music video for "Everybody But Me" uploaded.

"The Bottom Drawer Session, Vol 1" will be released on October 7th.